Who thought that was a good idea??? 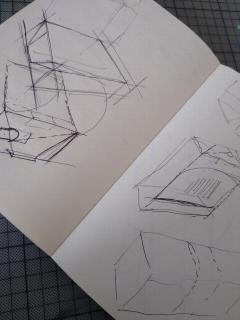 Well is anything a good idea? Supporting Sheffield Wednesday sounds a good idea but believe me its a total stress game…..!!!!!

Ideas are usually the result of a need or want, so its worth a shot isn’t it. Many clever people over the centuries have had great ideas, some came up with real solutions to an issue. Others were shit ideas..

We’ve all seen them in our everyday lives. To avoid legal action, I’m not naming any here!!!!

I believe I’m right in saying the Chinese invented paper? ( Correct me if I’m wrong, someone will!), centuries ago, long before it was thought of in the Western World. A lot of our inventions we use and see today were actually created through need and most are donkey’s years old. There’s nothing new, just a twist on the old.

So that brings me to what do you need? We all get bothered and stressed about something. Sometimes we have control over it, sometimes we don’t, it controls us.

Packaging is a need but also a thorney topic at the moment and will be from now on. It wasn’t much of an issue until a couple of decades ago. Some enlightened people could see the damage it may do to the planet, but they were dismissed as cranks!!!

The elephant in the room at the moment is plastic. Quite rightly it needs to stay out of the oceans as reported on by Mr Attenborough. It needs to be completely recyclable in every way. Joe Public need to know what the hell to do with it and they certainly don’t want to be complicit in sending it to Turkey, as reported recently. Who thought that was a good idea! Well probably someone who spotted an opportunty to make some ready cash!

So who exactly helps to eliminate plastic from our packaging chain? There’s a lot of talk about it and lots of retailers and packaging users are on a mission to drive the tonnage down. Good idea! We should. But who actually gets the gig?

Who has the smart ideas and inventive mind to develop plastic free solutions? Who has to explain that there are up-sides and downsides to removing plastic within packaging?

So we have to probe a bit more. Then there’s the issue of consequences. If you remove some plastic peices then maybe it can be replaced by paper based products, designed and created to do the same job. However in my experience it’s not always going to look the same, so expectations have to be managed. I’ve spent years removing plastic from clients packaging as well as creating eCommerce packs that will deal with ISTA 6A and all that other noise that has to be considered.

It’s possible, from all the solutions I’ve found, to achieve a reduction in plastic use but it needs a lot of consideration and beyond the horizon thinking ( You notice I didn’t use that phrase “Outside the box” It’s so yesterday!!)

Well, here’s the thing…. It’s all well and good inventing something or creating a solution but is it cost effective, workable, manufacturable and planet friendly even if you think so..?

Well maybe it is, but is that well known Public Joe actually going to dispose of it properly, ha,ha. Maybe if they’re informed enough but I bet if you asked 10 Joe’s to say if 10 plastic differing containers are all recyclable or at least which ones can go in the Kerbside collection, they’ll not have a clue. That’s the issue with ‘end of life’ products. The lack of information and transparency is the downfall of a lot of packaging ideas.

I keep seeing new “developments” which claim to reduce plastic waste or make it fully recycable compared to its predecessor. Well, without the message as to how different it is and what the hell to do with it once it’s done with, it’s no better than the pack it replaces.

So my point here is, it’s possible to create packs that replace plastic parts or the whole thing, with other more recyco’ friendly materials such as paper or its derivatives.

It’s dificult to show you what designers have worked on recently due to confidentiality but be assured it’s going on. Talking to the Design community is the best way to remove that planet unfriendly packaging. Always talk to a Creative about your issue, they get it!!!!

This site uses Akismet to reduce spam. Learn how your comment data is processed.

This website uses cookies to improve your experience while you navigate through the website. Out of these cookies, the cookies that are categorized as necessary are stored on your browser as they are as essential for the working of basic functionalities of the website. We also use third-party cookies that help us analyze and understand how you use this website. These cookies will be stored in your browser only with your consent. You also have the option to opt-out of these cookies. But opting out of some of these cookies may have an effect on your browsing experience.
Necessary Always Enabled
Necessary cookies are absolutely essential for the website to function properly. This category only includes cookies that ensures basic functionalities and security features of the website. These cookies do not store any personal information.
Non-necessary
Any cookies that may not be particularly necessary for the website to function and is used specifically to collect user personal data via analytics, ads, other embedded contents are termed as non-necessary cookies. It is mandatory to procure user consent prior to running these cookies on your website.
SAVE & ACCEPT
Social media & sharing icons powered by UltimatelySocial